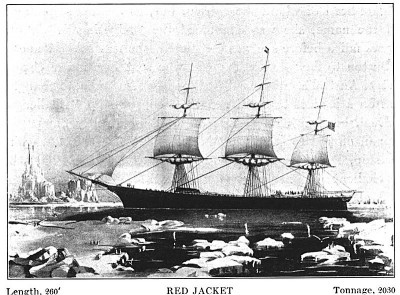 The main house, known as Eldridge Hall, was built at the turn of the 18th century for a Sea Captain, John Eldridge and his family. His famous brother, Asa, lived next door.  Asa was the Captain of the Extreme Clipper “Red Jacket”, known for its 1854 record breaking voyage of 13 days, 1 hour and 25 minutes from New York to Liverpool.  He set a speed record for the fastest trans-Atlantic crossing by a commercial sailing vessel that has remained unbroken.

John Eldridge was a large and powerful man with a forceful personality.  Described by Cape Cod historian, Henry Kittredge, as “having the head and brow of a Gladstone and the physique of a professional wrestler.”  He was known to be able to tilt an 1800lbs hoghead of tobacco to his thighs and lift it clear of a ship’s deck.  Referred to as “that old devil that lived over in Yarmouth” Eldridge was a complex man with a softer, sociable side, and his home was a social center for the community.

Eldridge Hall became a select school for young ladies under the guidance of Ms. Isabel Shove, John’s granddaughter.  She lived in the little cottage between the current inn and its neighbor.  An ad posted in the “The Century” promoted her business as “A select school for young ladies, Healthy location, Especial advantages for music, modern language, domestic science and English branches.  Term begins Oct 15th 1900. For particulars address Miss Shore or Fraulien Grotte.”  It is unclear how long the school operated.

The rear wing of the home, which predates the original structure by about 50 years, was moved and added on to the house.  This gracious and charming landmark became The Village Inn in 1946.  The Hickey family purchased the business in 1952 and successfully ran the inn for the past 63 years!  In 2015 the baton was passed to new owners.

We have implemented some new procedures to ensure a safe and comfortable stay. Click here for details